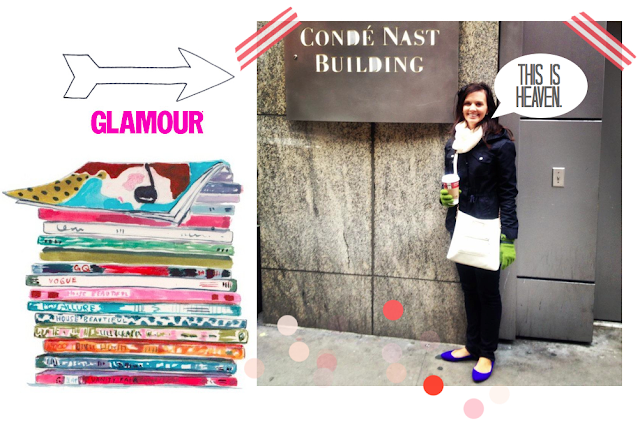 December 28, 2011, will always be remembered as a "Glamour Do." I'm not talking about my outfit, although I was pretty proud to show off my new blue suede shoes. Instead, I'll remember it as a day that my family and I got to meet up with an old roommate of my sister's and mine. Our meeting was brief, as JBC had to get to a production meeting (so fancy) and we were MoMA bound, but it was fabulous! My face literally hurt after visiting him, because my smile was ginormous. I felt so proud of him. It's nice to see someone like JBC in his element. As a talented and personality-plus southern gentleman, he set his eye on magazines and design. Around our apartment, Ms. Wintour was only referred to in the friendliest and simplest of terms -- Anna. JBC was the only person I knew that would go out of his way to get his hands on an Italian or French issue of Vogue. In Central Missouri, that's not an easy feat. The boy knew what he wanted, and after graduation, he fearlessly made the trek to the Big Apple. I can't even describe how a-mazing it's been to watch his dream become a reality. It's been almost four years since we graduated. The first time I saw his name printed in the Glamour masthead, I cried. To have visited his cubicle and receive a tour of the Glamour office, I'm left delightfully verklempt.
Stay tuned for next Monday's post where I'll undoubtedly overuse exclamation points and the term a-mazing. It's about time we talk MoMA, my lovelies.