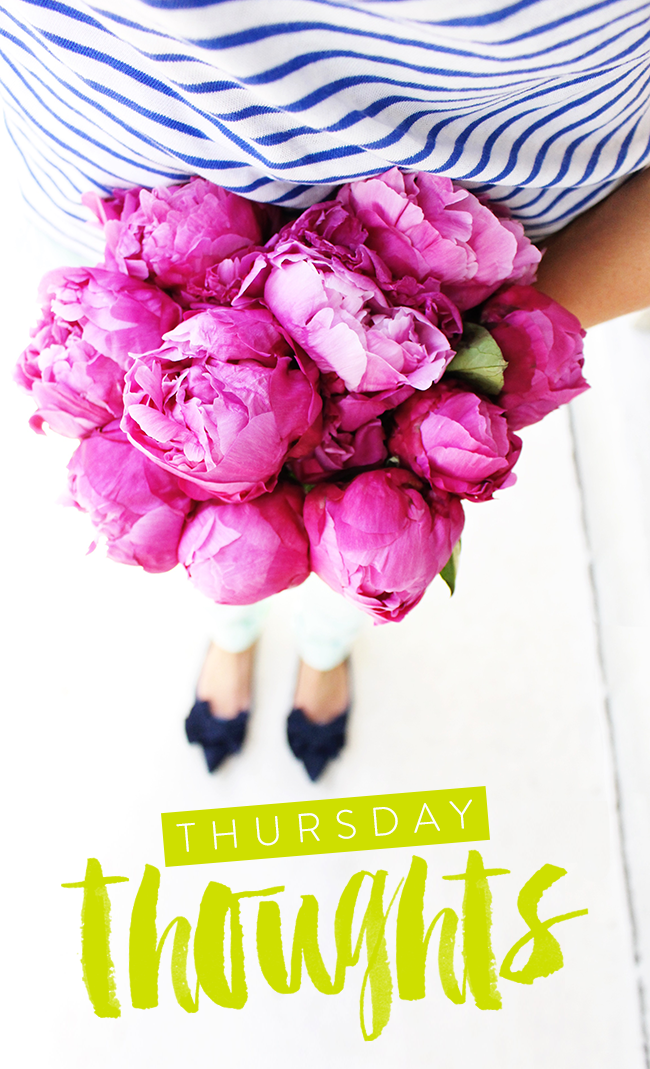 THINKING ABOUT: Sometimes I forget that Tripp will turn twelve this October. For being such an old soul, I take great pride in the fact that he's got so much spirit in him. Technically our firstborn, it never really dawned on me that he was aging like the rest of us. After all we've been through together (read more here), I suppose I thought he was invincible. But in the last two weeks we've seen signs of him getting older. He moves slower than he ever has, and he recently lost control of his bladder one evening while in a deep sleep. This isn't like him at all. After my family lost our Black Lab, Maggie, this past March, it's hard not to think of the worst. So instead I'm trying my best to focus on the way our lovable Golden gently picks up whatever food Max has dropped from his high chair, or the way Tripp reacted so sweetly to me blowing bubbles with the babe outdoors.

FEELING: Remember those pesky birds from last year who insisted on building their nest above the car port door and Flyboy just didn't have the heart to knock it down? Yeah, well those birds have returned with a vengeance. Despite countless attempts to knock the nests down and crafty tin foil barriers, they remain relentless in their efforts to call our doorframe home. It annoys the hell outta me! I have a feeling the birds take great pleasure in rebuilding every time I whip out the garden hose and spray down their day's work. I'm sure this all sounds quite heartless, but I wish you could see the way these things dive at me whenever I attempt to load and unload The Rig. It's awful! While this may sound dramatic, FB has seen the way these terrible creatures come at me with great haste. I guess you could say we've got a Seinfeld and Newman thing going on, and I refuse to back down. In my latest feisty attempt to show the birds who's boss, I cleaned the door with bleach and fired up my trusty pocket hose. After I was finished, I stood back and scanned the yard for the devilish duo, giggled at how absurd the situation is, and thought "Who gon' check me, boo?"

THANKFUL FOR: When we returned from Missouri, it took me several days to check our mailbox. This is so embarrassing because I live for checking the mail—it's kinda my thing. Anywho, upon filling my Baggu with catalogs, coupons, and junk mail, I was ecstatic to find an unexpected package key. I knew I hadn't ordered anything. What could it be? Much to my delight, a sweet blog reader sent me a fragrant candle from Magnolia Farm in JoJo's signature scent. She knew I was a fan of the show, Fixer Upper, and picked it up on a recent visit to Magnolia Market in Waco, TX. How thoughtful was that?! I'm still just blown away by her kindness and generosity. Lighting the candle and taking in the fresh linen aroma has been an absolute treat. There might be Max madness going on around our house, but if I close my eyes, the candle makes it feel like I'm at a serene spa and the laundry is ALL done.

EATING: Max recently transitioned from eating purees to solids. It's been a riot to watch him feed himself and explore new flavors and textures. After doing a little research for recipes and meal ideas on Pinterest, I decided to make a batch of Ambitious Kitchen's Oatmeal Cottage Cheese Banana Pancakes (high in protein and gluten free). You guys, they were incredible! Since preparing them for the first time last Sunday, I've made several batches to freeze. Max and I are equally obsessed with the recipe, and we're both really excited for breakfast each morning. Hands down, this is the best recipe I've tried in awhile. Promise me you'll give them a shot!

LISTENING TO: As Max has become more active, snoozing throughout the day is now lumped into one or two long naps. Huzzah! My two-hour reprieve each afternoon has become sacred. I not only depend on the time for my sanity, but it gives me an opportunity to work on the blog, tend to odds and ends around the house, or workout. Unfortunately, as I type today's post, I'm listening to a neighbor's car alarm blaring. Worst. Nightmare. No amount of white noise can keep Max from waking after hearing this horrendous sound. Gah! What's a girl to do? This is when I like to take advice from my dad and grab Flyboy's noise-canceling headphones. It's best to block out the sounds and pray my child falls back to sleep. Stat means NOW.

WATCHING: Yoo Hoo! Is anyone out there watching this season of Big Brother? What are your thoughts? Honestly, I still can't decide who I'm rooting for at this point in the game. I just know that Audrey is super lucky to have gotten this far. Also, something about the way she acts in the Diary Room irritates me a bit. Is James playing with any strategy? I like him as a person, but he's oblivious about what's going on in the game. Nice only takes you so far in the BB House. I wish Jason was part of a better alliance because he picks up on details and reads people well. This season's Twin Twist is pretty hilarious and has kept things interesting. Flyboy and I love that the dentist picked up on the difference in the duo's teeth.

READING: Flyboy won't be around this weekend so I have a tentative date with the August issue of Real Simple and a bottle of Fentiman's Rose Lemonade (spiked perhaps?). The only item on Saturday's nap time to-do list is a little light reading and relaxation al fresco. Not melting would be a huge bonus, but that's asking a lot in Swell Rio where 100-degree temps have been the norm lately.

LOVING: A few weeks ago Flyboy shared the following nugget of fatherly wisdom with me regarding Max, and I can't tell you how many times I've found so much truth in what he said. So without further adieu, I give you FB's wise words: "Be still. He's like a T-Rex. He detects movement." His rationale initially seemed comical, but I'm here to tell you he's right on the money with this one.


Enough about me. How are you feeling today? What are you up to? Thanks for stopping by!!