Note: I wrote this post two years ago. My blog was just six months old, but I feel just as strongly about these words now as when I originally wrote them. Since my readership has grown, I felt it was important to share my thoughts once more. One Fine Day is my platform to discuss topics that are near and dear to me, like honoring our veterans.

As a product of the military, I've spent the past 28 years surrounded by some of the bravest men and women. I've learned firsthand the true meaning of words like patriotism, integrity, and valor. I witnessed sacrifice in the name of prosperity and freedom. I stand in awe of those who've served our Nation selflessly, and I'm forever humbled.My dad served in the Air Force for over 20 years. For most of his career, he worked as an historian. He's a retired Chief that taught my sister and me the value in honoring our veterans by looking to both the past and the present. As a family, we walked the beaches of Normandy together. At such a young age, it was hard to process the scope of the historic events that took place there. When I look back, that trip was quite memorable. During those impressionable years, we learned what it meant to honor our veterans and why it's so important to never forget their service. I remember my dad instructing us to get out the dictionary, to look up the word, and to read the definition of veteran aloud. I won't forget that moment or the meaning ever.Being a history buff, he may have thought that trips to historic spots in Europe would teach us the most about those that served and sacrificed. He might not know that he, himself, was the best tool for his daughters to fully comprehend what it means to be a veteran. He may not have battled on the front lines (thankfully), but he wore the uniform proudly. I never once heard the man complain about work. Instead, he viewed this chapter of his life a blessing and an honor.One thing I've learned over the years is that each person's call to duty is quite different, but every service member is integral in supporting the safety of our freedom. It doesn't matter if you fly a desk (as my dad used to joke about his job) or you fly a C-17. Military jobs and missions may vary, but there's one thing every service member has in common — courage and commitment. It's important that we honor the contributions they've made to the cause of peace and freedom around the world.Awhile back, I watched an interview with Tom Brokaw (one of my absolute favorite human beings). He said that WWII united our country in an effort to save the world, and while deeply divided during Vietnam, the whole country was still very aware about what was happening. Mr. Brokaw believes that today's wars are not something the typical American thinks about every day. According to Tom, "Less than one percent of the American population is bearing 100 percent of the burden of battle."The legendary newsman went on to pose the following questions...


Do you know someone fighting on the front lines? How about a family in your town that has a loved one serving?

Brokaw says that if you can't say yes to one of these questions, then you don't really care about the war or the men and women who are fighting it. His biggest concern? People don't think about the sacrifices that brave soldiers and their families are making for freedom. The wars in Iraq and Afghanistan have been the longest in U.S. history. According to Mr. Brokaw, it's not just the length of time that has made these recent wars different than past ones — it's our country's level of engagement.

"I, as a political reporter, believe very strongly that this democratic republic cannot have something that involves our blood and treasure assigned to only a very small part of our population, and nothing else is asked of the rest of us. That's not just unjust. In a way, it's immoral."

Mr. Brokaw says that we all have to "re-enlist as citizens" by raising our consciousness about the wars — to think about the men and women who are fighting every day and losing their lives — and also to do something about it. How? Stay abreast with current events. Volunteer. Visit United We Serve. Take the time to shake the hand of a veteran and say "Thank You." As important as it is to act, it's just as imperative to reflect. In fact, why don't you go ahead and forgo an episode of trash reality TV, 15 minutes wasted on Facebook, or online retail therapy, and watch this 60 Minutes segment about wounded warriors and Operation Proper Exit. I guarantee that you'll be left speechless and humbled by these brave men and women. However you feel about war and its appropriateness, it's important that we remember to honor those that have served and serve today. 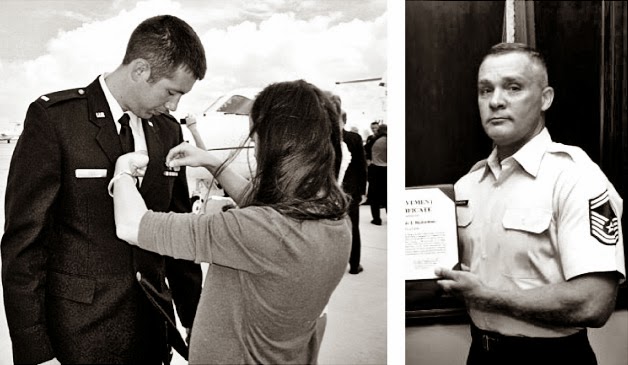 A special thanks to family and friends who have served and currently serve in our nation's military.
I'm so very proud to say that I know you!

With great humility and gratitude,
ANF