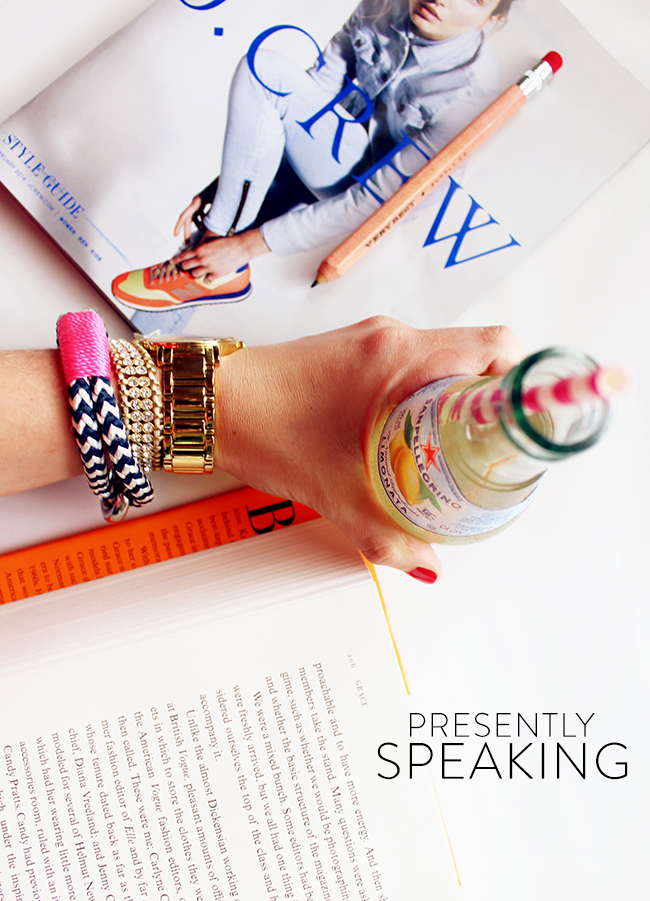 FEELING: I'm eager to send out this month's pen pal assignments. Whenever I check out #OFDGOINGPOSTAL on Instagram, my chest puffs with pride. There are so many happy snapshots of pretty paper—signs that cheer is being spread one envelope at a time. I'm thrilled to have so many people participate in the Snail Mail Exchange. As I mentioned on Facebook, emails will be sent today and tomorrow. Because I have to send each email individually, it's nice to divvy it up into two days. Be on the lookout for an email. If for some reason you don't hear from me, contact me this weekend and I'll pair you with your February pen pal.

LISTENING TO: At the moment, I hear nothing but clicks from my Magic Mouse and keyboard along with the buzzing sounds of T-6 planes flying around the area. The constant noise that comes from the nearby base resembles that of Yo-Yo Ma performing Flight of the Bumblebee. It's chaotic, but in a weird way very soothing. You know you're a product of the Air Force when...

THINKING ABOUT: In an attempt to be healthy, I'm sipping on fresh juice right now, but I'm dreaming of Chick-Fil-A. How's that for an oxymoron? I had my first encounter with this glorious fast-food chain when we moved to Texas last fall. Yes, it was my first time devouring that succulent chicken sandwich with the surprise pickles and warm buns. Oh em gee. I mustn't forget the waffle fries or freshly squeezed lemonade. They're pretty delectable, too! I heard the buzz, but never lived around one, which is probably a good thing. Having grown up overseas, my sister and I were always eager to eat at places like Taco Bell whenever we'd come back to the U.S. for family vacations. What were we thinking? I can't believe it took me 28 years to experience the deliciousness that is Chick-Fil-A. I'm doing my best to make up for lost time while maintaining my current pant size—that's easier said than done.

EATING: The aforementioned chicken chatter makes it hard to think of anything else. Maybe I should just tell you about the incredibly adorable Girl Scouts who were selling cookies outside the Commissary last weekend. Let's just say that I'm a sucker for oversized bows and polite little voices. Flyboy and I initially walked by and declined their offer. We both took about 20 steps and we were ready to exit the store, but we couldn't get over their cuteness and we felt terrible for saying no. I quickly whipped out my wallet and whispered, "I'm going back." Sign #423 that I'm becoming my mother. Anywho, I picked up a few boxes of Thin Mints and probably ended up scaring the girls and their parents because I kept obsessing about their fabulous manners. They were seriously adorbs. With Super Bowl treats and Chick-Fil-A, we definitely don't need cookies, but how can you deny such darling little girls?

WATCHING: After we breezed through Breaking Bad and dominated season one of House of Cards—so much heavy stuff— we took the advice of my sister and watched a documentary called Undefeated. The movie chronicles three underprivileged student-athletes from an inner-city Memphis high school. A former high school football coach turned entrepreneur, Bill Courtney, volunteered to lend a hand and help the young players/students beat the odds on and off the field. While it's not his day job, it's clear that this role consumes him. For five years, he gave up so much of his personal life to restore confidence and hope to a group of underdogs who lacked guidance and encouragement. It's not a film about football, instead it's a powerful and uplifting example of good in the world. I laughed, cried, and left the movie inspired to do something that improves the lives of others just like Coach Courtney.

THANKFUL FOR: Y'all, Big Tex is still kicking! Let me back up. Remember when I got a Fiddle Leaf Fig back in October? Well it's February and he's still alive. This is groundbreaking!! Maybe my black thumb disappeared? Perhaps I've magically inherited my mom's touch and there are signs of green after all? This is probably coming off as horticulturally haughty, but I could use a small win.

LOVING: I think I'd like to receive this Ponte Bell Skirt as my Valentine's Day gift. Ya got that, Flyboy?! I probably shouldn't be so "assertive" with this kind of stuff, but he doesn't seem to mind. The skirt is fun, girly, and I adore the green color. No surprise here.

P.S. The "Thinking About" and "Eating" categories are evidence I lead a healthy lifestyle. Hey, some weeks are better than others!