And other tales from a 10-night substitute teaching course... 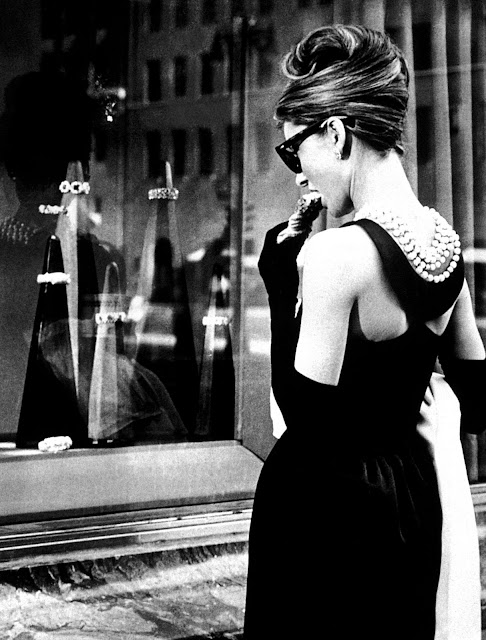 A little background info might be nice.
About eight years ago I moved to Hawaii with my family; my dad was also in the Air Force. It was my senior year of high school, and we moved from MO to HI. It wasn't a pretty year by any means. I wasn't the greatest person to be around, and I wish I could take back the roller coaster of emotions I put my family through. If I'd known then what I know now, I would have relaxed a bit and enjoyed my time with my parents and my sister. I might have even tried to make a friend or two. Ha ha! But as an overly dramatic teen, I thought my world had come to an end. I had one year to forge through and then I could return to college in Missouri. Little did I know that I'd end up in the 50th state AGAIN, but this time married into the military. Funny how that works, isn't it?
And here we are. I've been given a second chance at Hawaii. How often do you get a second chance in life? My emotions about returning have been mixed. Leaving a remote border town in Texas to live in Hawaii sounds dreamy, doesn't it? Well, flashbacks start playing through my mind. I have nightmares about my senior year and the awful person I became -- I never want to be that girl again. Suddenly I find myself in the back row of my Hawaiian heritage course (a graduation requirement) surrounded by locals (Hawaiians, Samoans, Japanese, Korean, etc.) speaking broken English and chowing down on SPAM Musubi. I kind of stuck out with my blonde hair and cardigans. They called me "Georgia" -- yup, Georgia. I guess my classmates thought I had a southern accent. While I think a southern twang is quite charming, I don't speak with this particular dialect. I promise. The Aloha State hasn't changed much since my parents were stationed here. Thankfully, no one has called me Georgia since we moved here, and I'm okay with that.
When I started looking into employment options in Hawaii, substitute teaching seemed to jive best with our lifestyle right now. We need some flexibility with flyboy's ever changing schedule. It's also a hot destination spot, so family and friends are itching to schedule a visit. Before school began, I looked into the process of getting certified. Island life is laid back, which makes it especially frustrating if you're Type-A(shley) and you want to get something done ASAP. Getting the runaround doesn't even begin to describe it. I'm learning to roll with things, but it took us awhile to get used to this way of life. There's definitely some culture shock when you're new here. Thankfully, we both had experienced it before. It will hit you in the face like a brick wall and you realize there's very little you can do about it, but take a chill pill and throw down a shaka.
After a month of trying to nail down dates for the substitute teaching course, I showed up at an adult education office to sign up, pay the course fee, pick up my textbook, etc. I pulled into the parking lot and realized that the office was located in a high school. For those of you who might not be aware, schools in Hawaii resemble motels. They can be very stark looking. In my opinion, they all look very similar. Panic came over me and I suddenly felt like I was showing up for my first day of class again. I'm an adult sitting in my car and crying. I wanted someone to tell me that I didn't need to do this and that I could walk away. There would be some other job just waiting for me. What a nincompoop!
I guess in a way I had to face my fear again. I abhorred the idea of attending the sub course for ten nights. I'd subbed in the past and the other states didn't require a 30-hour course. Seriously? In reality, rough memories and my inner Negative Nancy had already tainted my outlook on the experience. I've really got to stop doing that! I showed up the first evening with a positive outlook, and ten nights later I left the course with a few good laughs.
And since you've suffered through my long-winded background story, I'll share some of these funny moments with you. 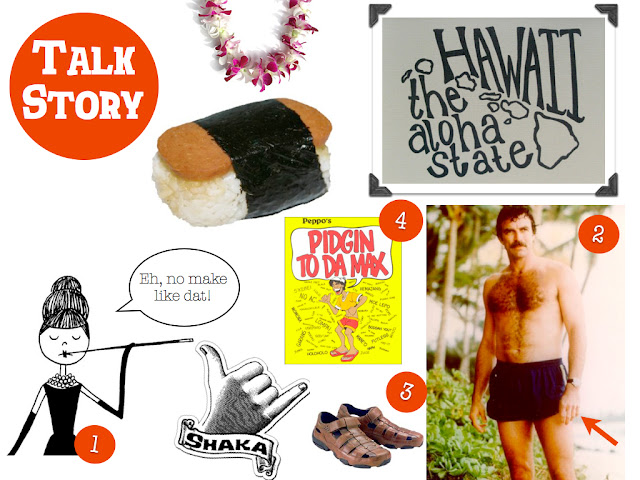 #1. Just call me Holly...
One night during our 10-minute break, I was sitting with my table mates and we were making small talk. It was me, another military spouse and a local guy. He was really friendly and asked how we liked it in Hawaii. The other military spouse was far more extroverted than me, so she answered his question and we both listened. Apparently she has a part-time job at a mall. She brought up the fact that so many local people call her Holly, and that's not her name. The local guy and I looked at each other and we kind of smiled. He said, "Do you mean haole (pronounced like howly)?" And she said, "Maybe? What does that mean?" I told her that it was a Hawaiian term for white non-locals. Everyone erupted in laughter because of the confusion. The local guy went on to ask how long she'd lived on the island and she said TWO years. Can somebody say oblivious? I don't mean to be rude, but it's near to impossible to not know this word if you live here. Learn more about the word here.
#2. Who wears short shorts?
Yowzah! Anywho, back to short shorts. We were discussing the appropriate and professional way to dress and he asked our class (approximately 25 students and 1 instructor) the following question, "When did men's shorts become so long?" First off, I don't know where shorts fit into professional wear, but I was humored by him. Some high school students recently started chanting the Nair song while he was up at the white board solving a math problem. I guess the students were appalled by the length of his shorts. Just in case you were wondering, he hasn't worn those shorts again. Phew!
#3. Slippahs
When discussing professionalism and work clothes, someone brought up the debate about sandals and flip flops -- or slippahs on the island. The instructor went around the room and pointed out whose footwear was acceptable for teaching. Are you kidding me? We're wasting time doing this? I could be at home watching Bravo. Thankfully, my flats got approved. She did say that it might be nice if the sandals had some sort of back strap. Say what? It's only acceptable for geriatrics and toddlers to wear sandals with a back strap. I'm not going to lie, I've got a pair of Keens, and I'm aware they break the rule. I don't wear them with the intent of making the Glamour "Do" List. Sometimes a girl needs a good outdoorsy shoe for an occasional hike. Otherwise, you will NOT find me rocking a sandal with a back strap at work. I draw the line! Gladiator sandals are in a whole different category. Not to worry. I think you know the kind of sandal I'm poopooing.
#4. Talk Story
This is the Hawaiian phrase for shooting the breeze or chatting. The term drives me bonkers -- it's almost as bad as the overuse of the word important (pronounced importint)! There's even a segment on the news on Tuesday's that's called Talk Story. You may think I've gone overboard, I'm sure. If you've lived here, you might understand. Most of our class consisted of talking story. It's nice to get to learn about other people, but not when your classmates start debating the use of Pidgin in the classroom. Instead of calling me Mrs. Fine, students would refer to me as "Miss". If you're a male, you're just "Mister", which sounds more like mistah. One of my classmates said she draws the line when students call her "Auntie" at school. For locals, this is a term of endearment and many times used if you have a close relationship. You might be called an auntie or an uncle and not be related. Some of my sister's friends would refer to my parents in this manner. It's sweet, but definitely not school appropriate. When some of the haoles and island newbies got lost in translation, one of the locals began to explain. The next day he brought the book, Pidgin To Da Max, and shared a few handouts. Here are a few examples of Hawaiian Pidgin: 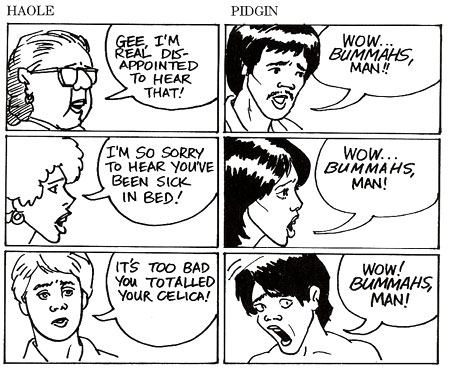 How are you?
Howzit brah?
Where are you going tonight?
Eh, wea you goin go tonight?
Let's go to the beach!
Eh, we go beach.
Please stop.
Eh, no make like dat!
A Mother Goose Nursery Rhyme: The Old Woman Who Lived in a Shoe
Dere waz one ol Tutu
Stay living in one slippa
She get choke kids
Planny braddahs and one sistah
She geev um lau lau
But no mo da poi
Den broke dere okoles
And sent dem moi moi
Vocabulary: 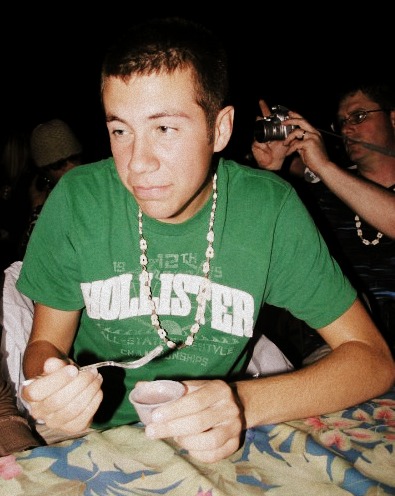 Here's a picture of flyboy eating poi for the first time
when he visited my family and me several years ago.
Eh, let's talk story on Monday.
A hui hou!
(or until we meet again in Hawaiian)
ANF
P.S. I realize that I may come off rather ethnocentric in this post. Much of what I've written was intended to be humorous and not to be taken too seriously. The same aspects of living in Hawaii that make me a bit crazy are also quite endearing. The greatest part of the military lifestyle is learning about other cultures. It's rather funny to revisit and live in a place where you once resided, but this time without my parents and sister. As my dad reminds me, we're making our own memories. This time it's our journey.